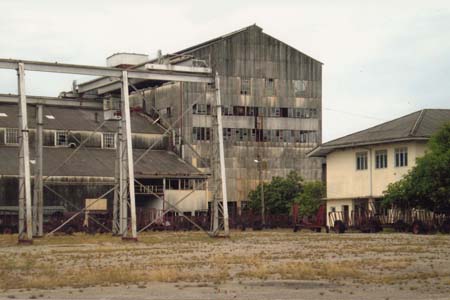 In the post independent era, one of the first development projects inaugurated by the Government of Sri Lanka was the development of Gal-Oya Valley, a part of Gal-Oya basin.

An important project undertaken was to cultivate sugar cane. The decision to grow sugar cane was based on three factors, availability of mass scale flat lands, sufficient water from Inginiyagala tank and the fact that for the traditional paddy farmer shifting to sugar cane was not an insurmountable problem.


Gal-Oya Valley is situated in the eastern region of Sri Lanka; south west of Kalmunai and North of Monaragala. The major township is at Ampara and the Hingurana sugar complex is situated approximately 12 km from Ampara town in eastern province.

Situated at Hingurana, the work on cultivation was commenced in 1950, with the sugar factory commenced production activities in 1960 followed by the commencement of distillery in late 1962. The Sugar factory that was originally commissioned by the Gal-Oya Development Board was transferred to the Sri Lanka Sugar Corporation in the year 1966.

The factory machinery was supplied by Mirrlees Watson of UK. The rated capacity of the plant is 2,000 tons per day (TCD). The factory consists of 3 roller five mill tandems with a vacuum pan sugar processing system. Plant produces crystal sugar and follows the defecation process. The Hingurana distillery was supplied by a French firm namely, Lapage Urbain and Cie has a processing capacity of 30 metric tons of molasses per day to produce 9,000 bulk liters of sprit per day. The past four decades, the Hingurana factory has changed their name and ownership several times.

The factory complex which was owned by the government since 1960 was closed on 1997 due to union unrest and mismanagement.